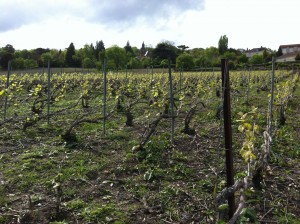 An expression of terroir in Champagne

I have been pretty occupied by the notion of “terroir” in Champagne lately. It all started off with the 4 independent winegrowers vins clairs and Champagne tastings 3 weeks ago. Terres et Vins de Champagne were de initiators of this type of tasting four years ago when they used their vins clairs as a way to better explain the specific characteristics of their terroirs in the resulting Champagnes. Their focus on the “soil” or terre in French reminded me of the Burgundian notion of terroir but applied to Champagne. In Burgundy vineyards and the allocation of the Crus status is defined in terms of Climats or Lieu-dits – or in other words it is the typicity of a specific “place” including soil, micro-climate and exposure which defines the wines.

I started thinking about this Burgundian definition of terroir whilst I was “bussed” around the Vallée de la Marne on the “Soirée Vagabondisme” organised by “Terres et Vins de Champagne” on the eve of the actual tasting. On our tiki tour we stopped off at several vineyards to taste some Pinot Meuniers vins clairs and Champagnes in the place were they were first conceived – ie among the vines :-)

Two facts really hit home for me on this journey – the diversity of the soil structure and influence of the micro-climates and the human input or role in the growing and wine making process. 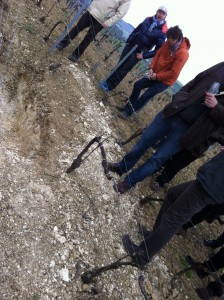 Soil composition in one of the Laherte's vineyards

The first fact, diversity of soils and the influence of the wine (micro-climatic factor) was beautifully illustrated at our first stop Aurelien Laherte’s vineyards in Chavot. Here we tasted two vins clairs from two different vineyards, both vinified in old barrels using only their indigenous yeasts. The first wine came from a very wind exposed vineyard with chalky and clay soils. The vin clair had a very pronounced mineral character as well as flavours of stonefruit (apricot) and pear and there was a distinctive salinity in the finish. The second vineyard was less exposed to the wind, the soils were more chalky, the stone fruit was more pronounced and a little more tropical (apricot, white peach and nectarine and a hint of small pineapple) and the finish had mineral chalky notes. The second vineyard (La Popote) had been planted about 35 years ago whilst the first vineyard was quite a bit younger – and yet because of the wind the yields were lower in the first vineyard. An interesting detail is that the vineyards were basically on either side of the road yet the difference in soil composition and wind exposure had translated itself in very different vins clairs. As we continued down the Marne Valley we tasted more vins clairs and also some Champagne yet every wine differed significantly from the previous one. Pretty amazing really as in total I think our trip was only just over 16 km.

This brings me to my second point – human intervention in the notion of terroir. After some interesting discussions on Facebook around a post I wrote for Vinogusto on the 4 independent winegrowers vins clairs and Champagne tastings it became very clear to me that man played at least as big a role in the expression of terroir as soil and climate do. Firstly he decides what variety to plant and how to plant the vineyard – some varieties are better suited to a specific micro climate and depending on the exposure the plants will be more or less influenced by the climatic elements. Also the age of the vines plays a role as older vines have deeper roots and tend to have naturally lower yields often resulting in more intense fruit at harvest. Another important human decision is when to harvest – I believe a better expression of terroir is achieved in fully ripened grapes as it is at that time that the diversity of flavours is reflected at it’s best. Whilst writing I also noticed that the one common factor between all the independent winegrowers involved in the vins clairs tastings was a desire to work the land in a more sustainable way and make wine in an artisanal manner. This in my opinion is pivotal to allow the terroir to express itself.

When we numb the land with chemicals from fertilisers and pesticides, we will drown the complex and dynamic relationships present in the soil and dumb down the potential expressions of this ecosystem. Hence I feel that if we want to express terroir specific qualities, it is quintessential that the subsoil is alive. By this I mean the vine roots (biotic components of the soil) can freely interact with the “natural” abiotic components such as air, mineral properties, water and sunlight and the grapes can absorb key elements of the soil specific characteristics. 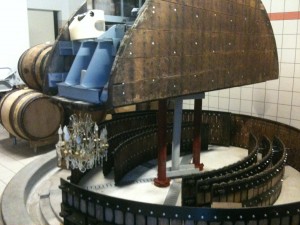 Yet it is important to note here that especially in Champagne the wine making process is elaborate and the end result is often not terroir focused. There are lots of human decisions impacting the final result including the definition of terroir. Because of all the steps in the wine making process, I believe a Champagne will always express the terroir as interpreted by the winemaker. Mineral notes, fruit intensity and flavour and other terroir specific characteristics are in a way polished by the choices made during the vinification. Among these I see the choice of using natural vs added yeasts, to chaptalize or not, the decision to use oak or not, to lees stir and to undergo malolactic fermentation or not, to add reserve wine to the final blend, the make up of the liqueur de tirage (what yeasts and sugar are used to induce the second fermentation in the bottle), the time the wine will spend sur lattes aging in the cellar and the dosage used at disgorgement. Through all of these choices the wine maker will influence the taste profile, the complexity and ultimate expression of the terroir in his Champagne. When another winemaker takes over and continues to work the vineyards in the same way as his predecessor, but makes changes to the vinification – eg decided to do the first fermentation in barrel instead of stainless steel – the expression of the terroir will have changed noticeably. The same goes for making changes in the vineyard – eg planting another grape variety, replace old vines with younger ones or make changes in the way the soil is toiled. Even when maintaining the exact same wine making process these vineyard changes will once again result in different terroir characteristics of this single vineyard Champagne.

Going through all of the above again makes it difficult (at least for me) to perceive Champagne as a pure terroir wine without taking into account the human intervention as part of the terroir. The two go hand in hand and the 52 Champagne growers at the 4 independent tastings were all very much part of their terroir – or in other words their single vineyard Champagnes were, in my eyes, very personal expressions of their land. In order to delve deeper into this I will aim to visit (and write up) each of these 52 vignerons and explore their terroir by visiting their land (terre) as well as their cellars to try and pinpoint each and everyone’s unique definition of terroir ;-)

Caroline is a certified Sommelier (by the CMS) and WSET diploma student. In order to specialize in the wines of Champagne she moved to the region and currently works as a wine consultant, wine educator and wine writer. She is a member of the Circle of Wine Writers and writes for several international publications including Palate Press, Snooth, Wine-Searcher, Decanter and Vinogusto; further activities include teaching Champagne related courses at Reims Management School and organizing personalized tasting experiences at http://www.tastingswithatwist.wordpress.com as well as being a regular judge at international wine competitions.
View all posts by Caroline →
This entry was posted in Caroline's Champagne, Champagne, Natural Wine, terroir and tagged Caroline's Champagne, Champagne, champagne making process, climatic elements, human input, human input in terroir, personal expression of the land, single vineyard, single vineyard Champagne, soil composition, soil diversity, Terres et Vins de Champagne, terroi, vinification, vins clairs, wine making process. Bookmark the permalink.