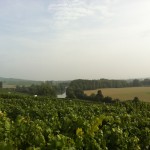 Champagne Georges Laval Les Chenes is an iconic cuvée, a single vineyard or lieu dit of 0.4 hectares (40 Ares), on the lower part of the steep slope between Cumières and Hautvillers. The vineyard is south facing with a gorgeous view of the Marne river, and has been organic for several decades. It is one of the few vineyards which is truly green as there is natural grass between every row. It is planted with Chardonnay which tends to develop a little earlier than the reds. This year the vineyard was hit by hail in May – before flowering. It damaged the flowers a bit, and the fact that flowering happened at the end of June, when the weather was still pretty cold, contributed to the irregular bunches which all seem to be affected by Hen and Chicken (Millerendage). However this did not affect the overall taste at all. 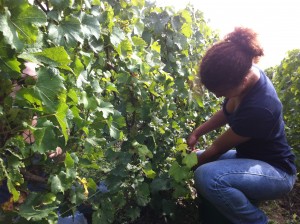 Laval started his #ChampagneHarvest13 by picking Les Chèvres with 12 pickers. 4 more will join this weekend to complete the harvest team of 20 people. There are a few new people this year but most of the team has been several harvests under their belt. Quite a few people are put up by Vincent during vintage which is pretty rare these days. But then again a lot of things are done in the old fashioned way at Champagne Laval.

They still have an old 2000 kg Goliath hydrolic jack press – the typical Cumières press because it was produced in the village. Today only 7 or 8 are remaining. The press works slightly different from the more common tradional Coquard presses in the way that the pressure is regulated through the jack which slowly pushes the lid down. One sets the maximum pressure and once this has been obtained the pressure is released. Goliath presses are not 100% automatic and need to be watched and listened by the press staff. Laval’s press is located in a small room about the size of a large double garage – it really is cute and cozy :-) 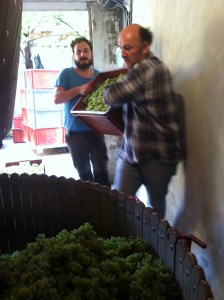 Vincent and Boris load the Press

I was lucky enough to witness the first press load of the harvest, so maybe a little more attention was needed than for future press loads. The grapes are weighed and then manually lifted into the press – there were so many of them that they just about spilled out. The juice is collected in two tanks next to the press – a larger one for the cuvée and a smaller one for the tailles. The first 20 liters of free run are added to the tailles as they are a little dustier, and the next 10 hectoliters is the cuvée. Vincent isolates a small tank of 3 hectoliters from the first pressing of the cuvée which he will vinify separately. To measure the cuvée and tailles he uses the very old fashion system of a measuring stick – a piece of wood with marks for every hectoliter – simple but very efficient. He adds sulfites at several stages, generally 1 centilitre per hectoliter, which converts to 10mg/l.

The yield at Les Chenes was 9 tonnes per hectares, which is 4.1 tonnes under what has been set by the appellation. The lower yields and the south facing exposure of the vineyard allowed the Chardonnay to fully ripen. The juice came in at just under 12% alcohol, and Vincent estimated the overall alcohol percentage to be around 11.5%, which means no chaptilization is needed. 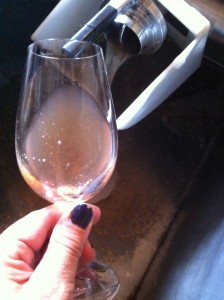 Some delicious Chardonnay straight from the press!

After pressing the wine is pumped in 2 tanks, one for the cuvée (7 Hectoliters), and one for the Tailles (2,5 Hectoliters) where the juices are allowed to settle for around 24 hours before they are racked and pumped into barrel where the first fermentation will happen.

Laval has 2,5 hectares of vines, which he farms totally organically, and has about the same amount again which he harvests and presses for other people. He think vintage will continue for another 9 days for him but adds wisely that “only time can tell” what the vintage will bring. For now at least it is looking very promising!! 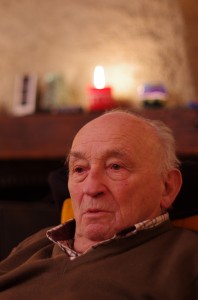 Etienne Calzac is a young guy with a modern installation in Avize. His family exploits 20 hectares of vines of which just over 11 hectares in the Sézannais, 6 in the Aube and the rest in Grauve, Avize and Bisseuil.
Etiennes grandfather, Raphael Bauchet, developed the family vineyards extensively during the seventies. He took a huge gamble when he bought the land in the Sézannais as in those days no-one bought land outside their village. Furthermore the land had no planting rights but his hunch that he would get the rights paid off and not long after he became a grower for Cliquot. By the time he retired and his children took over he had just under 40 hectares – not bad for a guy who started off with just a little more than 1 hectare :-)

Etienne farms his land in a sustainable way. He works the soil and has grass among his vines. He has 2.8 hectares which he works himself and of which he produces 10,000 bottles under his name. The rest of the grapes are sold as juice, mainly to Cliquot. 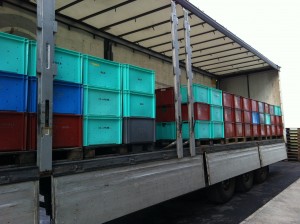 Grapes arriving by truck from the Sezannais

When I visited his 6000 kg pneumatic press had just been loaded up with grapes from the Sézannais. He has 60 pickers there and he thinks they will pick around 2 weeks but spread over 3-4 weeks, as there will be gaps between the different vineyards. The grapes are coming in at about 10 degrees alcohol and when I tasted the juice I was amazed by the acidity. Whilst we were at the press testing the alcohol percentage Dominique Demarville, the Chef de Cave for Veuve Cliquot stopped by to check his juice coming in. Demarville had just started his vineyard run that day and had been in the Aube, Vitry and the Sézannais before he stopped off at Avize. His first impressions of the harvest are positive and he feels the grapes are ripe and the must is harmonious – “with a great acidity and a good amount of sugar.It is a little less intense than in 2012, due to the two weeks of rain we had earlier in September”. He continued by saying that in the winery the year looks a little more complicated as the juice oxidizes very quickly so it is important to add sufites in time. All in all though he is happy with waht he tasted during the day.

Etienne pointed out that the grapes were lighter than other years, with the average crate case being around 41,5kg rather than 43-44 kg, but that the juice is running very fast – faster than previous years. In total Etienne will press 14 hectares at his pressing center at Avize as the grapes from the Aube are pressed in the Aube. From next week he will test a new type 4000 kg pneumatic press with holes in the membrane for the CIVC. The CIVC will monitor the pressing process and check among other things the colour of the juice, speed of pressing, and the must present in the juice. After harvest the press will be removed again.

Both presses stand about 3 meters high so the juice can run by gravity into the receiving bins in the winery which is directly below the press. The juice is split up in Cuvee & Taille, and the first 60 liters of free run are added to the Taille.

Caroline is a certified Sommelier (by the CMS) and WSET diploma student. In order to specialize in the wines of Champagne she moved to the region and currently works as a wine consultant, wine educator and wine writer. She is a member of the Circle of Wine Writers and writes for several international publications including Palate Press, Snooth, Wine-Searcher, Decanter and Vinogusto; further activities include teaching Champagne related courses at Reims Management School and organizing personalized tasting experiences at http://www.tastingswithatwist.wordpress.com as well as being a regular judge at international wine competitions.
View all posts by Caroline →
This entry was posted in #champagneharvest13, Champagne and tagged #champagneharvest13, Champagne, Chardonnay, Cliquot, Cummiere, Dominique Demarville, Etienne Calzac, Goliath Press, Les Chèvres, organic farming, pneumatic press, Raphael Bauchet, Sézannais, Vincent Laval. Bookmark the permalink.