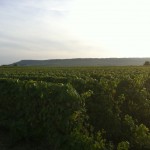 Sunset on the eve of harvest in Le Mesnil

The Goutorbe family is an institution in Ay. Not long after the first world war Emile Goutorbe, winemaker at that time for Perrier Jouet, decides to open a grape nursery. Over the next decades he will slowly expand his business by investing in vineyards in and around the village.

Almost a century later, Etienne and Elizabeth are fourth generation grape growers and wine makers and the family still owns one of the finest nurseries in Champagne. With twenty hectares they are also one of the largest grape growers in the town. Ay is Pinot Noir country and it is also the main grape variety in Goutorbe’s vineyards -where it accounts for just under two thirds of the plantings. They produce around five percent Meunier and the rest is Chardonnay. René Goutorbe, Etienne and Elizabeth’s father, is an astute business man and asked derogations for just about all of his plots. This means that the grapes have reached the minimum alcohol degree of 9,5% and that he can harvest when he wants rather than go by the imposed starting dates. He told me that he may not use the derogations but that he prefers to have the freedom to get the grapes harvested if the weather would change. 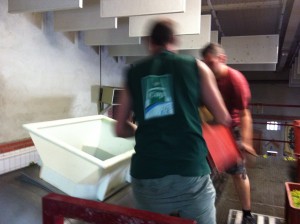 Charging the Press at Champagne Goutorbe

At their press center they have 3 pneumatic presses (2 of 8000kg and 1 of 4000 kg) and 2 traditional Coquard – but the latter are very rarely used these days. According to Elizabeth they last used them 6 vintages ago – but as the family presses for a lot of other people as well is is handy to keep them. The pressing center will process around 500 tonnes of grapes in the next two weeks.

Goutorbe by their pickers by the kilo – ( a la tache) and work with several teams who have been working harvest for them for the last 25 years. The grapes are processed per team – they are weighted and allocated to the team by Elisabeth when they come in before they are moved to the pressing center and winery. Goutorbe uses Bucher Vaselin presses. The juice is split in Cuvée (20 Hectoliters), first (4 Hectoliters) and second Taille (1 hectoliters). The free run is added to the second taille. Once pressed the juice is allowed to settle before it is racked after about fifteen hours. The fermentation happens in stainless steel tanks and is induced – as is the malolactic fermentation once the alcoholic fermentation is completed. Goutorbe bottle in spring and age their wine minimum for three years. They produce around 180,000 bottles per year.

If Pinot Noir is king in Ay, Chardonnay rules Le Mesnil in la Cote des Blancs. It is planted at 100% and is 100% Grand Cru. It is known to make very mineral, linear wines there, with and amazing freshness and acidity which can be aged for a very long time. 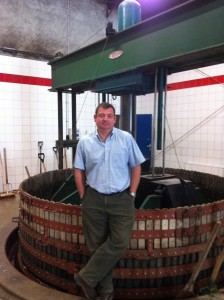 Pierre Gonet in front of his traditional Dollat Press

The Gonet family has been farming land there for the past five generations. Pierre Gonet was very young when he took over the business after his father’s sudden death in 1990. At just twenty years old he came back back from college and first worked two vintages with another winemaker – of which the 1991 vintage with Dominque Demarville – now Chef de Cave for Veuve Cliquot – to learn the tricks of the trade before he went solo in 1992.

He followed in his father Philippe’s footsteps and has continued to expand the vineyard. Today the family owns 20 hectares spread over 11 villages and covering almost 150 km North to South. Having a vines in several cru’s has many advantages when it comes to blending but it can be a bit tricky to work the vines and harvest in this many locations.

Pierre sister, Chantal, watched over the 60 pickers in Montgeux – a beautiful terroir in the Aube- and the most southern village the Gonet’s grow grapes in. Phillippe purchased 11 hectares in Montgeux in the late fifties and planted Chardonnay there. The soil composition is very similar to the soils in Le Mesnil – a little clay over lots of chalk. The wines are a little rounder and more voluptuous and great acidity.Today Montgeux is considered to be one of the best places in the Aube for Chardonnay and the grapes are pretty sought after. I tasted some of the Montgeux juice at the end of a press load and it was very sweet (it came in at 10.8% alcohol), had a great acidity and was balanced with a lot of different flavours. This may be because the volumes were significantly down – the Gonets only harvested around 9 Tonnes per hectare.

I also got to taste the first of the Le Mesnil juice – which was racey, mineral and again very sweet. The juice came in at 10 % alcohol and was of the first plot the Gonets harvested in Le Mesnil. It was pressed by their 4000 kg Dolat Press (very similar to a Coquard) and may well be vinified in one of the 2 thermo-regulated 60 HL casks for a new cuvée Pierre is working on. Again the yields were fairly low at around 10 tonnes per hectare and this is mainly due to the small bunch weight.

The pressing and winemaking process is completely done by gravitation at Gonet. The work in five levels from the press to the cellars where the bottles eventually will age. Below the press are two levels of winery, and then 2 levels of cellar. Average aging time is around three years but wines from Le Mesnil are generally aged at least five years.

Still in Le Mesnil, but completely different from the installations at Champagne Philippe Gonet is the Union des Récoltants Propriétaires or UPR. It is the second largest co-operative in Champagne and it’s installations are one of the most modern ones. In the Marne only the large Moet installation at Oiry matches the amount of of grapes they press – an average of about 700,000 kg a day. The co-operative has 600 members all independent growers from Le Mesnil or surrounding Grand Cru or Premier Cru villages. UPR produces around 120,000 bottles under the Le Mesnil brand which is exclusively made from Le Mesnil grapes and of which they export around 50%. 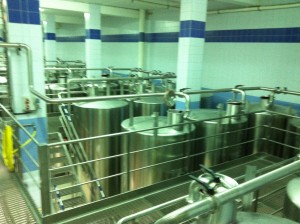 The grapes are weight as they come in and are placed in different processing lots – generally by village. The crates are then placed on a conveyor belt and from there the process is completely automated: the presses are automatically loaded and the crates move on and are washed. Even though a lot of things are automated the work force increases from around 18 to 70 during harvest. Not really that many people when we take into consideration that 60,000 hectoliter of juice will have been pressed in this short period of time.

UPR has 20 presses – most are 8000 kg pneumatic presses but they also have a few 12,000 kg pneumatic presses as well as a couple of 8000 kg Coquard presses with rotating metz. The juice is separated in cuvée and tailles and is allowed to settle for about 15 hours before it is pumped into one of the many tanks. UPR vinifies everything they press and just about all wines undergo malolactic fermentation. Le Mesnil is a very sought after Cru and this translates in spring by great demands of the large Champagne Houses for the wine. At that time UPR sells around 75% of it’s production on a first come first serve basis.

Caroline is a certified Sommelier (by the CMS) and WSET diploma student. In order to specialize in the wines of Champagne she moved to the region and currently works as a wine consultant, wine educator and wine writer. She is a member of the Circle of Wine Writers and writes for several international publications including Palate Press, Snooth, Wine-Searcher, Decanter and Vinogusto; further activities include teaching Champagne related courses at Reims Management School and organizing personalized tasting experiences at http://www.tastingswithatwist.wordpress.com as well as being a regular judge at international wine competitions.
View all posts by Caroline →
This entry was posted in #champagneharvest13, Champagne and tagged #champagneharvest13, Ay, Bisseuil, Champagne, Chardonnay, Goutorbe, harvest, Le Mesnil, Montgeux, Philippe Gonet, Pinot Noir. Bookmark the permalink.