Author’s note before you read this article – Amanda Reagan accused me of plagiarism because my original title was Before the bubbles – an organic story of vins clairs tastings. She has written an article in 2010 which was called ‘Before the Bubbles’ and is convinced I got the title from here. Very unlikely as I read the article over three years ago and had completely forgotten about it till I got her messages. In fact I got the idea from the french ‘avant les bulles’ (literally translated before the bubbles) which is a common descriptor when talking about vins clairs. Even if I personally believe there is absolutely no value in Amanda’s argument I decided to change the title to get her off my back and prove that I am in no way interested in copying what she has written. 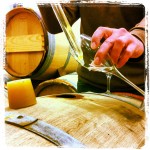 Winter is one of the most crucial seasons in Champagne. In the vineyard the pruners decide the crops of the next season and in the cellar the time has come to taste the vins clairs to assess the potential of the last harvest.

Last year I tried to explain a little more about what vins clairs are and why it is not that easy to taste them, especially for the untrained palate. I wrote about four very different producers to try and give a general overview. 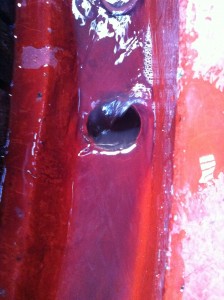 Today I want to talk about organic vins clairs. Already in my extensive harvest tour I was more drawn by the organic growers; I had been amazed by the purity of the juice. Furthermore, I remember being at Champagne Fleury – the day after the region had been hit by more then 80 millimeters of rain in twenty four hours – tasting the juice which not only showed no signs of rot (even though I had seen some of rotten bunches in the press), there also was no dilution. So I once again realized organic viticulture can produce special grapes and juice, and I was interested to see how this translated in vins clairs.

Overall I got the impression that organic vins clairs were easier to taste; they seemed to have a richer mouthfeel, more depth and more body, and the possibility of how the second fermentation process would develop these wines really excites me. I want to add here that just about all the organic vins clairs I have tasted this year have been vinified in barrel which may add to the richness. 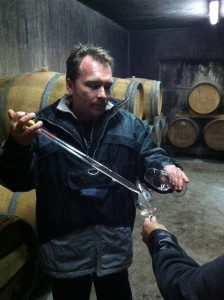 I started off my vins clairs campaign at Vincent Charlot. I already wrote about his vins clairs last year, but then I had tasted them after several months of aging. The first time I tasted them this vintage was at the end of December when not all wines had finished their alcoholic fermentation yet. Vincent grows biodynamically, and just as in the vineyard he takes his time in the cellar. His wines take several months to complete their natural fermentations and his wines do not go through malolactic fermentation.

I have been lucky enough to taste Vincent’s wines again in February and it was amazing how they had developed, without ever loosing their purity and freshness. This made me realize just how alive his wines really are! His vins clairs will stay on their lees till the summer when they will be racked and bottled for the second fermentation. I hope to taste them again a few times before this happens to confirm my hunch that they will be different again as time elapses. 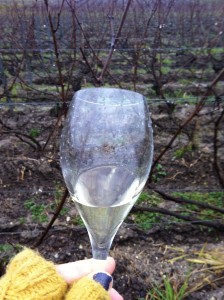 Another biodynamic producer I visited is Leclerc-Briant. The House, founded in 1872 had been a pioneer in organic and biodynamic viticulture in Champagne. They continued to work the old fashioned way in the fourties relying on organic farming principels rather than chemistry, and from 1990 they started to work biodynamically. However, certification was not put into place till 2000, and the complete property (30 hectares) was certified by Demeter in 2008. In 2011, after the sudden death of Pascal Leclerc-Briant, the family decided to sell first 17 hectares of vineyard -15HA to Lanson and 2 HA to Roederer – before Roederer bought the rest of the property at the end of the year, only to sell it off again without its vineyards in 2012. The only exception were the the two vineyards attached to the buildings high up the hills in Epernay: La Croisette and La Chaude Ruelle. These vineyards, in total 0.7HA, is where the Leclerc-Briant family began its biodynamic experimenting and they are very much part of the story of the House. In the spirit of the brand, the new owners, Mark Nunnely and is wife Denise Dupré, have decided to continue to limit production only to organic and biodynamic wines also today. For this purpose they have purchased 8 hectares of vineyard which they are converting to biodynamic farming. However as these grapes are not certified they are currently sold to other suppliers. To make their wines they work with Roederer to buy the grapes of a few historical parcels from which single vineyard cuvees are made as well as several other organic and biodynamic suppliers. Not the most obvious choice, but one which stresses the House’s commitment to its roots and philosophy. 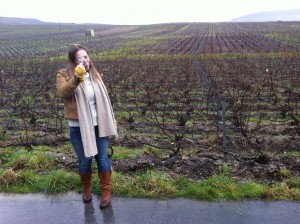 Eying out the sunshine in my glass!

The Chef de Cave today is Hervé Jestin, a talented winemaker who is known for his biodynamic practices, in the vineyard and in the winery. Jestin has a rather wholesome approach to winemaking and treats his barrels much in the same way as babies are treated in a nursery. He prefers wines are tasted away from the barrels so no negative energy can be transferred back to the barrels. This is why the vins clairs tasting with Leclerc-Briant was one of the most memorable ever – we ended up tasting the wines in the pouring rain looking out over the vineyards of the Chateau d’Avize. But even the rain could not dampen the joy I felt at tasting the wines who were vibrant and very much the expression of the different terroirs of Leclerc Briant’s growers. We started with a wine from Cramant, then moved on to a meunier from one of the historical parcels of the House; we tried the same wine without sulfur as well and the result was even more amazing. We did the same experiment with a Chardonnay from Montgeux in the Aube and even if the rain did not hold off I had plenty of bright sunshine in my glass!! Needless to say that I am very impatient to taste them as Champagnes in years to come… 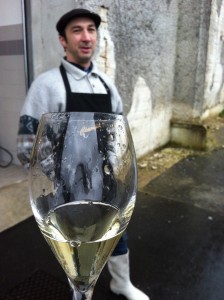 I returned to the Chateau d’Avize two weeks later to taste the wines of the two brands of the SAS le Roy Soleil who has their headquarters there. Once again Hervé Jestin is the winemaker and his approach to sustainable wine growing is well expressed by the two brands. Victor Dravigny is a Champagne brand where the grapes come exclusively from growers in organic conversion whilst the Folliage Champagnes are certified organic. The idea behind the two brands is to try and convince growers to convert and support them during their conversion which is a very noble goal indeed.

We once again tasted the vins clairs in the vineyards, but this time the sun had come out to play. To taste a vin clair in the vineyard where the grapes have actually been grown is a mind blowing experience; it adds an extra dimension to the wine, at least for me. We tried several wines with and without sulfur – which really is a very interesting experiment. Whilst some of the non sulfur wines were a little reductive, they opened up a lot quicker and showed more depth and purity. The final goal for the company is to make exclusively organic Champagne without the use of sulfites.
Both brands have made their first baby steps in the market recently and I believe the Champagnes will quickly receive the recognition they deserve. 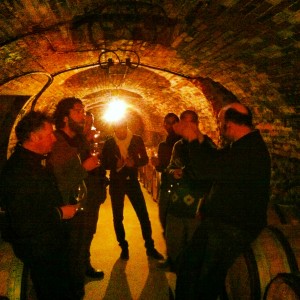 I cannot talk about organic vins clairs of the 2013 vintage without mentioning Vincent Laval, the vigneron I visited several times last harvest. I knew before I arrived that the wines would be awesome – which may sound a little pompous and pretentious. However I had based this gut feeling on two very solid facts – firstly the juices I had tasted straight from the press last harvest, and secondly I had already tasted vins clairs with Vincent in previous years :-) Pompous or not, I was right – the vins clairs were amazing and as an added bonus I got to taste with 5 good looking Spanish guys and David Léclapart!!

Having tasted the grapes before harvest and then the juice, I recognized the parcels and loved the way the vins clairs reflected the original characteristics in a more developed way – a bit like a toddler turned into a teenager. I know I have to be patient but I KNOW these wines will turn into amazing adults with a definite WOW factor!! 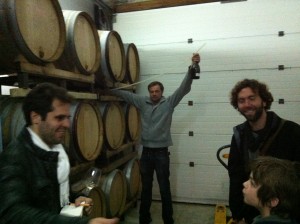 A last person I want to mention very briefly in this article is Emmanuel Brochet, another organic grower from a small wine growing village at the outskirts of Reims. Villers-aux-Nœuds only has around 40 hectares of vines today, but before the phyloxera crisis the village counted around 200 HA of vineyards. After the crisis, a lot of growers were reluctant to go back into vines, and instead opted for other agriculture crops or to have their land converted to housing plots.

Emmanuel’s ancestors were all round farmers, and when part of their land was put back into the Champagne appellation in 1962 they leased the land on which a vineyard was planted. In 1997, when the lease was up for renewal, Emmanuel decided to keep the land and have a go at grape growing. This makes him the first grapegrower/winemaker of the family, something which is quite rare in Champagne. Equally rare is the fact that his 2,5 hectares of vineyard are one large plot of land. His vineyard is located on the slopes of Mont Benoit and is planted with Pinot Noir, Meunier and Chardonnay. The oldest vines are still the originals, planted in 1962.

We tasted 4 vins clairs starting with the reserve wine – a solera in tank renewed by 1/5th every year – consisting of a blend of the 3 grape varieties. After this we tasted the 3 varieties out of barrel. Emmanuel wanted to show us that the wines resembled each other – in other words that the terroir characteristics overpower the varietal ones. For me this was a real revelation – partly because I had never had the opportunity to taste to taste 3 varieties from the same vineyard in vins clairs before and partly because we are almost ‘brainwashed’ into thinking in terms of varietals, always looking for generic varietal expressions.

My visit to Emmanuel had been completely impromptu – I tagged along with David and the Spanish guys after visiting Vincent – but it proved to be of enormous importance to me as it gave me yet again more proof that (micro) terroir really is significant in Champagne!!

Caroline is a certified Sommelier (by the CMS) and WSET diploma student. In order to specialize in the wines of Champagne she moved to the region and currently works as a wine consultant, wine educator and wine writer. She is a member of the Circle of Wine Writers and writes for several international publications including Palate Press, Snooth, Wine-Searcher, Decanter and Vinogusto; further activities include teaching Champagne related courses at Reims Management School and organizing personalized tasting experiences at http://www.tastingswithatwist.wordpress.com as well as being a regular judge at international wine competitions.
View all posts by Caroline →
This entry was posted in Caroline's Champagne, Champagne, vins clairs and tagged biodynamic, biodynamic farming, Caroline's Champagne, Champagne, Emmanuel Brochet, Fleury, Folliage, Hervé Jestin, Leclerc-Briant, organic, organic farming, single vineyard, Victor Dravigny, vin clair, Vincent Charlot, Vincent Laval, vins clairs. Bookmark the permalink.