A quick review of Prowein 2012 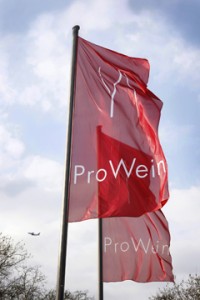 Last weekend I attended Prowein in Dusseldorf. Over the past decade Prowein has developed itself into THE wine fair to attend in Europe. It attracts visitors and exhibitors from all over the world and with a lot of determination and focus you could really taste your way around the world.

It is a well known fact that a lot of business is done at this fair – however to get a deal one has to be well prepared and have made contacts and appointments long in advance. This year I heard from several importer/distributor connections visiting the fair that they were busier than ever – several of them having 8 or more appointments per day with different wineries trying to expand their distribution. In today’s buyers market distributors/importers have become more demanding and are looking for a partnership which can give them the right wine at the right price and with the support they need to build the brand in their country.

What amazed me this year was the amount of winery representatives present at the fair, just walking around and having meetings. I asked a few people why they had not taken a stand and the most common answer was that the main reason to be in Dusseldorf was to meet with potential distributors and that it was easier to have a meeting when one was not distracted by other “customers”. Furthermore they felt that tasting the wine was only a small part of the meeting and therefore found it more (cost) effective to just leave samples with the potential distributor if they did not have the opportunity to taste with them there and then. I found this approach quite interesting – in fact I feel it makes perfect business sense for both the winery and the potential distributor, especially since the latter can take the samples back and compare with other samples in a tasting back home.

Besides being known as the wine fair to do business it is also one of the most amazing places to visit for any #winelover. As said at the very beginning one can taste wines from just about any wine producing country – so the opportunity to learn is everywhere. And as just about everybody and anybody in the winebiz attends this fair it is also THE place to meet up with wine friends and #winelovers from all over the world :-)

The highlights for me where:

The Australian Trail tastings: Wine Australia had organised some fabulous comparative tastings. Each day they focussed on a different grape variety and a few regions where this variety expresses itself the best. I attended the Dry Riesling tasting on Sunday which focused on the Clare and the Eden Valley. This particular tasting was very interesting as it included several older vintages and we had the opportunity to see how well these Rieslings had aged under screw cap. Having long been a fan of Clare Valley Riesling I really cherished the opportunity to taste different vintages of some of the top producers!!! My favourite wine was the Petaluma Hanlin Hill Clare Valley Riesling 2002, which was still amazingly fresh and youthful (lots of lemon and lime, even a little kumquat and tangerine) , yet also showed some of those typical aged Riesling notes (petrol &manuka honey) and a very flinty almost saline finish. This is a perfect food wine and would match well with a cheese board, chicken in creamy mushroom sauce or with some tangy crudo or cheviche prawns! The other two tastings focussed on new wave Chardonnay and classic Australian Cabernet Sauvignon. I tasted a few of the wines in the other tastings and once again was really impressed with the quality and diversity. The Chardonnay was mainly sourced from cooler climate regions and the wines impressed by their elegance, finesse and uniqueness. The Cabernet Sauvignon came from the Coonawarra and Margaret River regions, which are both coastal regions benefiting from some cooling ocean influences. Again the wines I tasted were very diverse, elegant, structured and would age quite well. I would be very interested to do a comparative vintage tasting in a few years time:-)
In my opinion Wine Australia really made an impact with these tastings as they focussed on quality Australian wines in a higher price bracket. Each of the wines I tasted was elegant rather than bold and an expression of their terroir; together they showcased the diversity present in Australian wines. For a country known to produce fruit forward pretty similar styled wines this was an excellent move to introduce the trade to the “other” Australian wines. 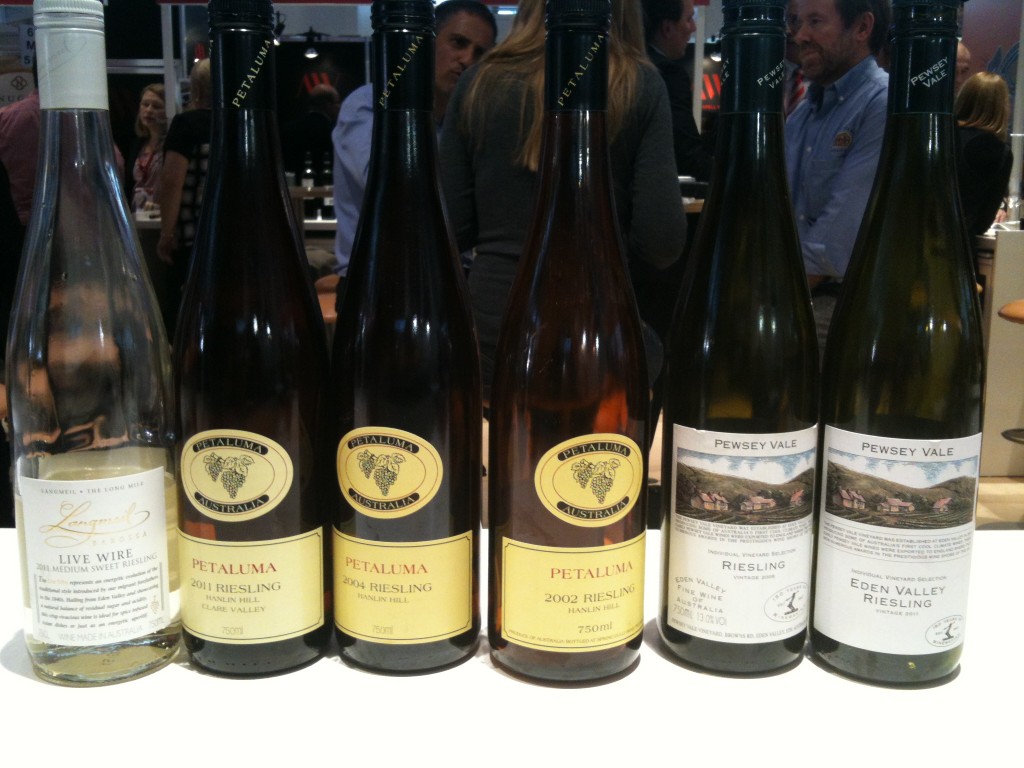 MW Master Class – An introduction to the Institute of Masters of Wine: This master class took place in the New World Pavilion and was hosted by Lynne Sherriff MW, Caro Maurer MW and Pedro Ballesteros MW. The class focussed on the Masters of Wine Tasting paper, through a blind tasting of 3 flights (1 white of 3 wines and 2 red of 2 wines), we learned what the Master of Wines examiners are looking for when marking a tasting paper. First we had some time to taste, take notes and answer the questions before the 3 MW’s engaged us in a discussion about the questions and the wines. It was my most amazing tasting experience as for the first time ever I had the opportunity to compare notes with 24 other #winelover-s and get feed back from 3 MW’s. I feel I learned more in those 50 minutes than I have in the last year, and I will actively look for similar tasting opportunities in the future:-)

Organic Wine Hall: My last highlight was the Ecological and Organic Wine Hall where I spend most of Monday. It was great that Prowein had carved out a space where one could easily taste and compare organically farmed and ecologically produced wines. It’s also an important acknowledgement of the growing interest in Organic Wine in general. The hall was buzzing, the wines were great and best of all every producer I visited was passionate about organic farming and had a story to tell!!

If these were my highlights, unfortunately there were a few major disappointments too….

The first one being without a doubt the lack of free wifi. This made it extremely difficult to share my experiences online and to communicate with people I had arranged to meet. Even in the Press Center – which by the way was miles away from the rest of the fair – the signal was weak and kept on dropping out so after 30 minutes I just gave up and returned to the fair. In the Internet Lounge one had to buy vouchers to use the internet – please note that at €8/hour or €40/day access throughout the fair was not guaranteed. The lady behind the counter suggested not to buy the day ticket as she had obviously had too many complaints about the wifi not working properly in all of the halls… I find it amazing and crazy that whilst one can have free wifi just about anywhere (Mc Donalds, Starbucks, hotels and airports just to name a few) that there is no access at such a prominent and large event as Prowein… There even was no access to web based wifi systems such as eg T-systems… I heard these providers were blocked in order to force people to use the hugely overpriced official internet system… A real failure then that at that price the wifi was still not guaranteed… I really hope that the organisers get enough complaints about this crazy wifi policy and that they have better provisions next year….

My only other big disappointment was the Introduction to Wines of Turkey tasting. I had been really looking forward to this tasting, organised to attend with other winelovers and in fact it was the first Prowein event I had registered for. However, it saddens me to say that as much as Wines of Australia got things right, the Wines of Turkey really got them wrong. I know that there are great and not so great wines everywhere, but all generic tastings I have attended up till Sunday have always been focused around the better wines rather than on the not so brilliant examples. I really do not know what the Wines of Turkey were expecting from this tasting but through the choice of wines they presented I fear they may have put more than a few people off… Bar a few wines, the majority of what we tasted was too alcoholic, unbalanced an had a nasty bitter oak tanin finish… I think the last two wines weren’t too bad but by that time my palate had totally been abused by all the oak that I don’t know whether the wines were actually good or just less invasive which would have created an impression of being nice… If I am brutally honest these were some of the worst wines I have ever tasted :-(
When I questioned the choice of wine I was even more confused to find out that the Wines of Turkey had changed the selection at the very last moment… This meant that they paid people to visit Turkey and pick wines only to change them at the show. I never did find out the exact reason WHY they picked the wines they did and have to admit to be still more than a little curious about this… I just don’t understand why a generic body which is investing heavily in promoting Turkish wines through eg hosting the OIV (World Wide Conference of Vines and Wines) and sponsoring the EWBC (European Wine Bloggers Conference) this year would want to show such bad examples at the guided tastings at Prowein?? Surely this undermines a lot of the effort of trying to get people excited about Turkish wines… The only reason I have been able to rationalize is that the wines we tasted are a true representative sample of the Turkish wine market hence they are the wines Turkey is looking to export. This also corresponds with what I have read on carpertblogger, a Turkish Blogger giving advice on Turkish wines…

Caroline is a certified Sommelier (by the CMS) and WSET diploma student. In order to specialize in the wines of Champagne she moved to the region and currently works as a wine consultant, wine educator and wine writer. She is a member of the Circle of Wine Writers and writes for several international publications including Palate Press, Snooth, Wine-Searcher, Decanter and Vinogusto; further activities include teaching Champagne related courses at Reims Management School and organizing personalized tasting experiences at http://www.tastingswithatwist.wordpress.com as well as being a regular judge at international wine competitions.
View all posts by Caroline →
This entry was posted in Natural Wine, networking, Uncategorized, wine eductation, wine fair, Wine Regions, wine tasting and tagged #WineLover, Australian trail tasting, distributor, Ecological and Organic Wine Hall, free wifi, importer, Institute of Masters of Wine, introduction to Wines of Turkey tasting, lack of free wifi, MW Master Class, Organic Wine, Prowein, tasting experience, wine, Wine Australia, wine business, Wine Fair, wine tasting, Wines of Turkey. Bookmark the permalink.