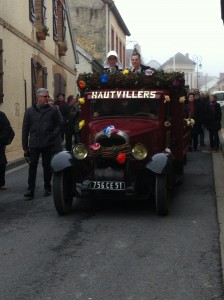 It was unusually cold on the 22 January, the day St Vincent is celebrated in Hautvillers. ‘La St Vincent’ gathers the whole village together to give thanks to their patron saint for the harvest that was and to pray for another great viticultural year.

Hautvillers is one of the few villages in Champagne who celebrate the event on the actual name day of St Vincent rather than the weekend before or after. This shows how just about every Altavillois (and there almost 800 of us) is either directly or indirectly involved in the process of making Champagne. There are 52 full time vignerons in the village, but just about everybody has some vines they work after hours. Hautvillers has a long tradition of vine growing and wine making and is known as the ‘cradle’ of Champagne, as it was here, at least according to legend, that Dom Perignon first discovered sparkling wine. 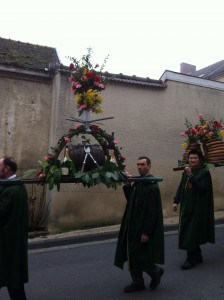 Wine & Brioche are very much part of the celebrations

Every year, the St Vincent festivities start at the home of one of the Champagne makers. The members of the local confrérie, the fanfare and officials gather there around 9.30 AM; they have a quick toast to St Vincent before they start their march through the main streets of the village. A decorated old vintage truck bearing the colors of Hautvillers leads the parade. Members of the confrerie follow, dressed up in traditional Champenois clothing, carrying with them a pile of brioches, a barrel of wine of last vintage and the statue of St Vincent.The colorful procession is accompanied by the tunes of the the fanfare – a mixed brass drum band – and as it snakes through the streets of the village and along the way more and more join the parade which ends in front of the Abbey church.

St Vincent is in essence a catholic celebration dating from the he middle ages. At that time every trade had it’s own brotherhood or confreries named after the patron saint of the trade. For vine growers and wine makers this was St Vincent. The brotherhoods were in mainly responsible for social security duties, helping each other out in case a member had fallen to illness or been in an accident. With the revolution the confreries, as a lot of other catholic institutions were dismantled and abandoned, but they were given a second life after the first world war when communities gathered together to rebuild their villages after the debauchery of the war. From the thirties onward festivities have been revived and have been going strong ever since. 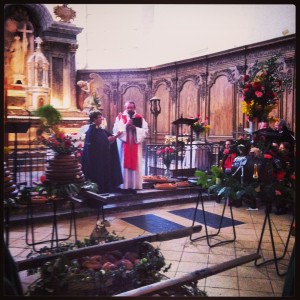 In Hautvillers, a group of young winemakers were the driving force behind this year’s celebration. They were the ones carrying the brioches and last years still wine (vin clair) to the the front of the church so they could be blessed in front of Dom Perignon‘s grave. After the blessing, the community was invited to share the brioches of the friendship and a glass of Champagne in the grounds of the Abbey. It is one of the rare occasions villagers have the opportunity to enter the Abbey grounds, which are private property of Moet and Chandon and closed to the public.

Before the award ceremony and reception a large fire, made from vine cuttings is lit in the main square of the Abbey. The members of the confrérie & the fanfare parade a few times around the fire, before everybody gathers in the old press house for the award ceremony. 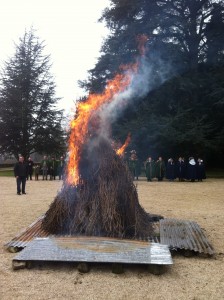 Bonfire in the Abbey Grounds

In the ceremony, pruning certificates and a few other qualifications are awarded to locals who have passed them over the last year, and both the head of the conférie and the mayor talk about the viticulture highlights of the last year. 2013 had been an unusual year with very late flowering, but the hot summer made for a great vintage both in quality and quantity.

Both men also spoke about the Champagne Unesco Nomination which came just over a week before the festivities and the opportunities Unesco Herritage Status would have for the village – after all Hautvillers is the key village of the nomination.
In the crowd I was surprised to find out that not everybody was as excited about the nomination – a lot of people are worried about the regulations and restrictions which will come with the nomination… 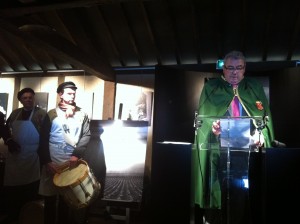 After the speeches the brioches were passed around and the champagne flowed freely for the reception of the friendship. All the winemakers donate a few bottles to make sure there is enough for everybody. After the reception festivities continued over a sit down lunch in the afternoon followed by a more food and bubbles at the ball populaire at night.

Caroline is a certified Sommelier (by the CMS) and WSET diploma student. In order to specialize in the wines of Champagne she moved to the region and currently works as a wine consultant, wine educator and wine writer. She is a member of the Circle of Wine Writers and writes for several international publications including Palate Press, Snooth, Wine-Searcher, Decanter and Vinogusto; further activities include teaching Champagne related courses at Reims Management School and organizing personalized tasting experiences at http://www.tastingswithatwist.wordpress.com as well as being a regular judge at international wine competitions.
View all posts by Caroline →
This entry was posted in Caroline's Champagne, Champagne and tagged brioche, Champagne, Dom Perignon, Hautvillers, St Vincent, wine. Bookmark the permalink.