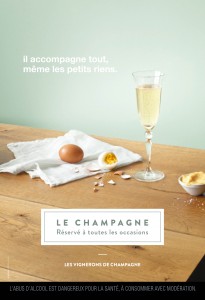 For the last fortnight, Facebook has been alight with everyone and anyone in the champagne world (yours truly included) voicing their opinion on the new communication campaign of the Syndicat des Vignerons de Champagne (SGV). A few months ago, the SGV decided to launch its first ever big communication campaign with the aim to reconquer some of its French market share. Over the last decade growers have seen their sales decline by 27%, from 78,464 000 bottles in 2008 to 57,380 000 in 2017. This decline is closely linked to the sharp fall in French sales which dropped from 181,388 000 bottles (2008) to 153,842 000 bottles in 2017. In 2008 92% of the Champagne growers sales were attributed to the French market. Still, when comparing figures, it seems that the vignerons were not only hit by a declining French market, they also lost market share in this market. In 2008, just under 40% (39.9% to be precise) of the French champagne sales were bottles sold by growers. By 2017, this share had been reduced to 32.5% to the advantage of the Champagne Houses (+6.3% in the last decade) and Cooperatives (+1.1%). And even if the growers average bottle price has increased from €10.73 in 2008 to €12.6 in 2017, it remains the lowest compared to the Cooperative (€13.7) and Champagne House (€13.6) average bottle price. 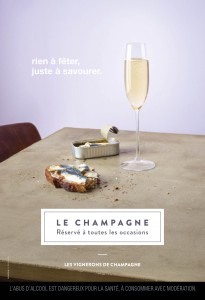 Nevertheless, it is possible that the growers’ market share decline is linked to their lower pricing and hence to a perceived lower quality. The French market analysis of the yearly sales report by the Comité Champagne says: “More generally, in a growing economic context, demanding French consumers are consuming less but better quality, particularly when it comes to alcoholic drinks.”. Proof of this can be found in the sales price (in France) of the so called star-growers, who sell their bottles at a significantly higher price then the growers’ average quoted here above.
Moreover, it is important to point out that during the last decade the growers export sales increased from just under 8% (6,163 million bottles) in 2008 to 13% (7,434 million bottles) in 2017 and that in the same period the export sales price increased from €11.33 (2008) to €14.84 (2017) in Europe, and from €11.42 in 2008 to €16.43 in 2017 in the rest of the world. This clearly shows that growers’ export sales are by far more beneficial both in volume and value.

Yet, still the SGV decided to target the French market, which to be fair remains the single largest champagne market with 50% of the total sales. 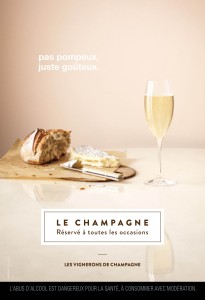 They allocated a 12 million Euro budget to the communication campaign and requested M&C SAATCHI LITTLE STORIES to come up with a design to attract millennials to the champagne market. The idea behind the campaign is to free champagne from its festive image, and instead promote it as a beverage which can be consumed anytime and everywhere, paired with anything. And while the press release talks about spontaneous champagne consumption and discovering and sharing different pairings at after-works or dinner with friends, the visuals tell a different story. After all how often does one share an egg, an artichoke, or 1 sardine sandwich? Then again when was the last time yuppie millennials bought 1 glass to share in a group… And who (especially in a bar or restaurant) still serves champagne in 80’s glasses??

According to the press release, the images refer to Flemish still lifes and enhance the enchanting character of champagne. Personally I doubt that millennials are very familiar with the Flemish Masters, and the enchanting character of champagne in the chosen imagery is way too subdued – not to say nonexistent – to make anyone dream…Lastly still lifes are not really known for their conviviality and spontaneity. 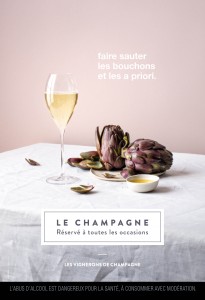 I am sure you have guessed by now that I am not a fan of this campaign. In fact I believe it’s “much ado about nothing”, to quote Shakespeare. I question very much that this campaign will have a positive effect in the sales figures in years to come and therefore I feel strongly that the 12 million Euros would be much better invested in more sustainable viticulture practices and picking rot out of the grapes to produce a higher quality wine sold at a higher price. (for more details see my article on wine-searcher) In other words, it would have been better to give the French consumers what they are looking for, and potentially making a further dent into the growing export market.

However, I would not go as far as to say that this campaign desacralizes champagne – a comment I have read many times these last few weeks. This may be because I do not believe champagne is by definition sacred. Indeed, it was the beverage of choice (generally without the bubbles though) at the coronation of the kings of France (or le sacre du roi in French), but that was only because the kings were coronated in Reims.

Champagne built its reputation and renown on being the best sparkling wine out there, something which today is not necessarily a given anymore. Quality means one continues to question oneself to push the boundaries to produce the most authentic product in any given circumstances. While there are many Champenois who are indeed committed to this (see producers in Terroir Champagne: the luxury of sustainable, organic and biodynamic cuvees), the majority still believes that the word “champagne’ is indeed sacred; for them it implies the quality is by default superior to any other sparkling wine, because champagne is more expensive than the other wines. This for them justifies champagne’s luxury image. Many people with these believes are hence upset with the SGV communication campaign, especially professionals with close links to the Champagne Houses tend to frown upon the campaign’s intent to free champagne from its gold plated image. 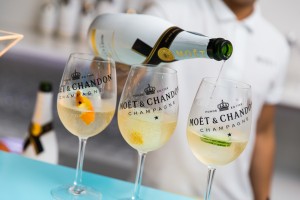 This is probably why these same people were a lot less critical when several big brands began to promote demi-sec champagne cocktails on ice as a food pairing. An example here can be found on the official Moët & Chandon website, which suggests the following “food pairing’ for Moët Ice Imperial: “served with 3 ice cubes in a large Cabernet-style glass and mixed with any of the following ingredients (mint leaves, lime or white grapefruit zest, cucumber peel, a very thin slice of ginger, cardamom seeds or raspberries and strawberries) to heighten its freshness and aromatic intensity.”.

One could easily argue, that champagne cocktails equally desacralize champagne. Remember the wine world’s outrage at the Chinese habit of diluting their Grand Cru Bordeaux’ with coke. It is generally accepted that one does not add ice or anything else to a glass of “quality’ wine. After all, if one wants to make wine cocktails, a bland non expensive wine is most often used for the base. The rest would be considered a sign of bad taste. While there have been a few fervent opposers of the ‘champagne on ice’ promotion – eg the 2017 Terres et Vins de Champagne ‘Sans Glaçons’ campaign – most of the champagne world has been remarkably forgiving of this trend. In fact many of SGV campaign’s most fervent critics have even defended it, saying it was Champagne’s answer to Prosecco Aperol Spritz or that champagne cocktails have always existed. Doing so they conveniently forget that both Spritz and Champagne cocktails are mixed drinks – as in another (generally alcoholic) drink is added to the glass. Champagne on ice is 100% champagne, with cocktail decorations….

Moreover, it is a well known fact (at least in Champagne) that the marketing push for these types of cuvees was at least partially driven by the dubious 2011 vintage, and the trend is set to continue if the region wants to get rid of the 30% rot-infected 2017 wines in tank. The good news for the ‘champagne on ice’ producers is that their marketing push (which undoubtedly by far exceeded the SGV’s 12 million Euro budget) seems to work. For the last 5 years demi-sec export sales have increased by an average of 7.3% year on year. In 2017, demi-sec export sales made up 3.1% of the total volume exported et 2.9% of the total export value. The growth in demi sec sales was driven by Japan (+18.5%), the UK (up 40.3% year on year), the US (up 18.8% year on year) and Australia (up 39%), in other words all markets where Houses have the biggest share of the sales (averaging around 90%). No French market figures were available in the report.

Personally, I believe that both the SGV campaign and the “champagne on ice” promotion are equally distasteful in their “food pairing” choices. They both try to focus on anything but the quality of the wine in the glass. The SGV campaign masks the taste by using a glass that prevents us from truly tasting the wine, while the “demi-sec cocktails” use sugar and ice to numb the flavours. Furthermore both add ‘pairings’ which will completely take over the original taste of the wine. Yet many people feel safer with the cocktail option; for them the bling bling marketing and high price pardons the fact that ‘champagne on ice’ equally butchers the image of champagne as a quality wine. But no matter how beautiful a mirage is, its essence is optical delusion, and delusion always leads to disappointment. Or in the words of Neelam Saxena Chandra ; “In the mirage of mirror, difficult it is to distinguish between truth and fake; remove that layer of lens on your eyes, and the fake shall rattle like a snake”.

Caroline is a certified Sommelier (by the CMS) and WSET diploma student. In order to specialize in the wines of Champagne she moved to the region and currently works as a wine consultant, wine educator and wine writer. She is a member of the Circle of Wine Writers and writes for several international publications including Palate Press, Snooth, Wine-Searcher, Decanter and Vinogusto; further activities include teaching Champagne related courses at Reims Management School and organizing personalized tasting experiences at http://www.tastingswithatwist.wordpress.com as well as being a regular judge at international wine competitions.
View all posts by Caroline →
This entry was posted in Champagne, wine marketing and tagged #marketing, Champagne, champagne on ice, communication campaign, delusion, demi-sec, mirage, sales figures, SGV. Bookmark the permalink.