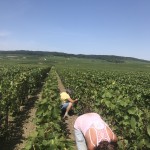 picking in Ambonnoy with Marie Noelle

Harvest started early in 2018, officially opening on August 20th, yet the official dates showed big differences, with some villages only opening early September. Derogations are possible and even if a few people began picking earlier, so far  the harvest has been slow to start, wit many people waiting till next week to bring the troops in. There are several reasons for the delays, which definitely are more widespread than in previous years/. Firstly, the weather is holding up, so there is no real risk for spoilage. Secondly, the overall grape load on the vines is very heavy – many people say these are the biggest yields they have ever seen, and there have been BIG yields in the past…. And even if this has been one of the sunniest and hottest summers on record, the grapes are struggling to ripen (evenly). Lastly, the complicated seasonal employment regulations are making weekend work more cumbersome and a whole lot more expensive. The result is that even if the harvest has officially opened in many villages,  many producers are will only start in the following week and it will probably be a drawn out experience.

The good point about this is that it allows me to visit a few friends to tell their story here as I will write a more generic report for Wine-Searcher anyway. I have been thinking which angle I should use here, and since I won the very coveted Terres et Vins de Champagne prize in April, I decided to focus on the 22 Terres et Vins vigneron(ne)s. It actually a real privilege to highlight these amazing wine makers as they were my initial inspiration to dig deeper into the Champagne Terroir which eventually led to my Terroir Champagne book. Furthermore, after all the sad bad practice stories I have written about the region lately, its a real pleasure to focus on quality for a change!

So my post today is about two great vignerons, Marie-Noelle Ledru and Jean-Baptiste Geofrroy. 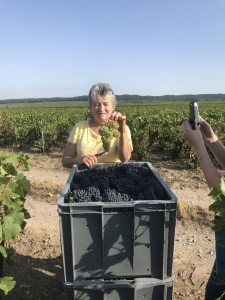 On Thursday I had the great pleasure to join Marie-Noelle’s picking team on their first day of harvest. Hot weather had been forecasted so we left for the vines early to start picking Pinot Noir in La Chatelaine around 7,15 AM. Picking grapes is something I cannot seem to stay away from, even if my dear friend Onne and I often said we would never pick grapes again while we did harvest at Jacquesson in 2012. I kept my promise in 2013, but since then I have always picked at least a day every harvest I love the joyful atmosphere, the happy banter, the teasing, the nonsense and the occasional spontaneous singing. Its also one of the best ways to quickly get a feel for the year, as the vines hide nothing: its among the vines I first realized how bad the rot problem really was last year… But on Thursday, 2017 seemed a very faded nightmare as the grapes are in great health, sweet, evenly ripened and a real pleasure to pick (and eat)! I would like to stress that even if all Marie-Noelle grapes were ripe – the press load came in at 12% potential alcohol – this is not necessarily the case for the whole region. In fact I have heard several stories of presses at 9 and 8.5 degrees potential alcohol in the last few days…

The main reason for the extreme beauty of Marie-Noelle’s grapes is without a doubt a direct result of her viticiulture practices. She has long worked the soil, and has limited the yields – even in this abundant year, her total yield is not likely to exceed 13,000 kg/hectares – hence a long way off the 16,000 to 19,000 kg/hectares the CIVC has given as average yield for the region… 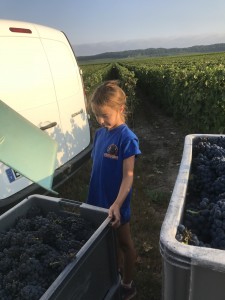 Alice Cailleux, the 5th generation to join Team Ledru in the vines

Her team of pickers mostly come from the Ardennes and are more or less all related. They have been picking for Marie-Noelle’s family for generations: Alice, a young girl who joined us in the vines in the morning, is the 5th generation harvester at Champagne Ledru. Her father Laurent carried the baskets and later helped out to load the press (with her uncle Mario), while her grandfather Remy is in charge of the press and winery. They all bring regional specialities to share during the morning casse-croute, which is still washed down with Ambonnay rouge and champagne in real glasses. Personally  preferred to stick to coffee seeing that at 10 AM the temperatures were already hovering around 28 degrees Celcius :-) But I enjoyed the traditional meal again accompanied of happy banter and lots of teasing. Marie-Noelle was with us in the vines, picking, laughing and making sure the cases were not filled to the brim. Even if she now barely produces any more wine (last year just 1,000 bottles), she is as meticulous as she has always been.

Marie-Noelle still houses, feeds and wines her harvesters and back at the homestead Bernadette overlooks and helps the two cooks turn out delicious and nutritious meals. The team eats at two long tables and wine, champagne and ratafia flow freely during the meals. According to Remy very little has changed over the 30 odd years he’s been coming, only maybe that the ties between the families seem to have become even more emeshed. Laurent even jokes that the champagne be will soon be renamed Ledru-Chailleux ;-) 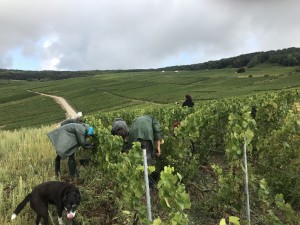 Saturday morning, temperatures were significantly cooler (barely 12 degrees) when I went to join Jean-Baptiste’s team of pickers in les Chênes Montagne. The 30 ares plot planted in Chardonnay is part of the 3 hectare biodynamic trails Jean-Baptiste engaged in this year. Again the grapes were gorgeous, golden and very sweet, and the yields averaged around 12,000 kg/hectare. Eduard Cattet, Jean-Baptiste’s vineyard manager was pretty excited about the biodynamic trial and he was very happy with the results. He told me even though the season had been relatively straight forward, the heavy rain in June had caused a mildew outbreak, as the soil had been too wet to treat in between the showers. Jean-Baptiste explained later that they managed to dry out the mildew with an essential oil treatment of oregano and cloves, with both men being very happy with the results of this alternative treatment.

Its Jean-Baptiste’s first year of biodynamic trialling and he prefers to go slowly while being guided by Jacques Mell, one of France’s biodynamic icon’s. He decided to experiment on 1/5th of his total surface across the 3 main grape varieties yet opted to include the most complicated vines. He explains that if it works there, he knows it will work everywhere. Both Jean-Baptiste and Eduard told me they have seen changes, and sometimes even things they do not understand. They are both very happy that the whole team is on board still they want a little more experience before they expand the experiment any further. This is mainly because of the restrictions in labour and material needed to treat effectively using only contact products allowed in organic viticulture. This is also the reason team Geoffroy is in no rush to certify. They have however been exchanging extensively with Team Roederer, who this year added another 105 hectares to organic conversion on top of the 10 hectares already certified. Both Eduard and Jean-Baptiste feel that having Roederer’s biodynamic vineyards just around the corner really help them, especially since Roederer has almost 20 years of biodynamic experience.

Since last year, the Geoffroy’s also changed back to hiring pickers by the hour, whom they house and feed in Cumières. Jean-Baptiste’s father René, is really happy with this change of policy as it reminds him of the good old times. He is actively involved with the pickers, looking after the casse-croute and eating with them at lunchtime together with Eduard.Most of the harvesters are foreign, and the current team consists of 8 Polish people, an Italian couple, a German lady who’s mum harvested for René 25 years ago and a Spanish lady. as well as a few locals. The atmosphere was just as warm as at Marie-Noelle’s and people join the team more for the experience as for the money. 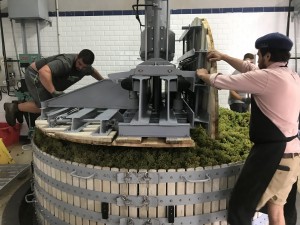 As the press and winery are located in Ay, Jean-Baptiste and his winery team are physically removed from the harvesters for their meals. Yet Karine, Jean-Baptiste’s wife, is always looking for opportunities to bring the teams closer together. Jean-Baptiste’s daughters also participate in the harvest. His youngest daughter Azalée can often be found picking but on Saturday she was at her grandfathers baking cakes for the teams. Her sisters Rosalie and Colombine were at the winery and looked after clients with previous tasting appointments. Just like his father he feels that harvesting remains very much a family affair and everyone participates in their own way.

Caroline is a certified Sommelier (by the CMS) and WSET diploma student. In order to specialize in the wines of Champagne she moved to the region and currently works as a wine consultant, wine educator and wine writer. She is a member of the Circle of Wine Writers and writes for several international publications including Palate Press, Snooth, Wine-Searcher, Decanter and Vinogusto; further activities include teaching Champagne related courses at Reims Management School and organizing personalized tasting experiences at http://www.tastingswithatwist.wordpress.com as well as being a regular judge at international wine competitions.
View all posts by Caroline →
This entry was posted in biodynamic, Caroline's Champagne, Champagne, Champagne Harvest 2018 and tagged champagne harvest, Jean-Baptiste Geoffroy, Marie-Noelle Ledru, Terres et Vins de Champagne. Bookmark the permalink.